Monaco have completed the signing of Chelsea target Aleksandr Golovin on a five-year deal from CSKA Moscow.

The 22-year-old, who starred for Russia at the World Cup, had been linked with a move to Chelsea, with new head coach Maurizio Sarri stating his interest in adding some midfield quality.

Last week, CSKA Moscow team-mate Sergey Chepchugov had hinted the midfielder could be heading to Chelsea.

However, Golovin has been snapped up by the Ligue 1 team, with Monaco’s vice-president Vadim Vasilyev admitting there was competition for his signature from “very large European clubs”.

Vasilyev told the club’s website: “We are very happy with the arrival of Aleksandr Golovin at AS Monaco. He is a talented young player, very prominent during the World Cup, but we have been following him for a long time.

“He already has solid experience in Russian first division and internationally. Despite the competition of very large European clubs, Aleksandr has chosen the sporting project of AS Monaco, which will offer him the best conditions to continue his progress.” 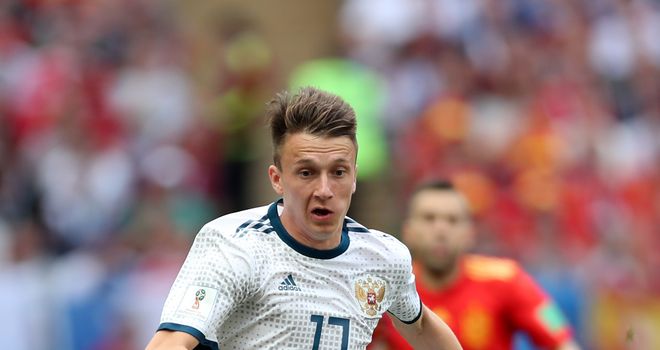 Golovin played in four of Russia’s World Cup games as the hosts reached the quarter-finals before losing to Croatia on penalties.

“I am very happy to sign at AS Monaco,” Golovin said. “This is a new adventure for me that I approach with a lot of ambitions. I am now very much looking forward to meeting the staff and my new teammates and to get going.”